Editing through Kindness - Skirt Yankers who care about exposed bums


I watched a lovely lady wander through a church buffet once and gasped in horror at her terrible faux pas. Having visited the toilet, she’d accidentally tucked her skirt hem into her white knickers and moseyed happily through a large group munching on her scone. It looked awful. It was one of those heart stopping moments where I knew I had to do something as her bottom drifted past my face, but temporary paralysis kept me in my seat as I wondered how to sort it out.

How do you mend that kind of public problem without even more awkwardness? Horror was replaced by a thousand questions.

1. I’d never conversed with the lady, so if I yanked it out, would she slap me?
2. What could I say as I fondled the bottom of a stranger?
3. Should I be smiling as I performed the act, or would I look like a pervert?
4. Should I leave it for someone else to deal with?
5. What would I want to happen if it were me?

In a single fluid movement, my friend leapt to life, lurched for the woman, yanked the skirt down, said, “Hey friend, nice legs,” pinched her bottom and sat back next to me.

The lady turned and thanked her with genuine gratitude and my friend continued our conversation. My mouth refused to close and I degenerated into a horrible companion, complete with hero worship and accolade. I made more of a fuss in my seat than she had lurching for a stranger’s bottom. What she did was so natural and it confounded me.

Many years later found me in a different country, working part-time in an all-boys school. Wearing a pretty floral dress, I made my way from the staff toilets to where I’d parked my car that morning, a kilometre away in a side street. To get to it, I needed to walk past the windows of the English department containing over 200 boys aged between fourteen and nineteen. They studied Shakespeare while I escaped for the day. I felt a yank on the bottom of my dress and turned in surprise. “You had your skirt tucked in your...”

The skirt yanker went crimson with embarrassment and flapped her hand wildly at my bare legs. She didn’t know what to say but performed that small kindness for me anyway, a sisterhood in our testosterone laden environment. I thanked her and went on my way, passing the classroom windows without incident. It could have been a very different scene complete with school newspaper headline. 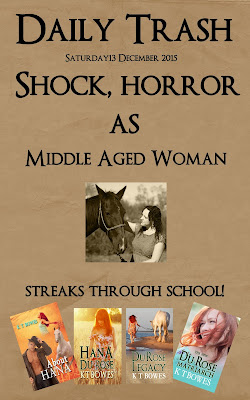 There’s no easy way to point out a screw up but if you care about someone’s dignity, you kinda have to. Yes I write, but I’m also an avid reader. When I see a novel with the same typo repeated to the point of annoyance, or a bad habit in a writer’s otherwise amazing work, I am honour bound as a fellow author to yank that skirt right out of their knickers, even if I don’t have the words to do it without embarrassment.

I’ve said many times how OCD I am about pretty much everything. In the same way I can’t pass something out of place, I also can’t read and ignore blatant oopsies. My secret vice is that I note every error on my Kindle, which shows up as a file marked ‘Clippings’ when I sync with my computer.

The problem is knowing what to do with these ‘edits’ once I have them. Those same questions plague me again.

1. I’d never conversed with them socially, so if I point it out, will they hate me?
2. What can I say as I broach their mistakes?
3. Should I smile sweetly as I defame their product and then never talk to them again?
4. Should I leave it for someone else to deal with?
5. What would I want to happen if it were me?

I will try to communicate with the author because it seems wrong to collect 50+ edits and then delete them when I would love to be sent a file of things wrong and enjoy the opportunity to fix them.

As an author, I’ve permanently got my skirt tucked in my knickers no matter how many times my work is edited. There’s a typo breeding programme which few readers know of and nothing short of annual editing will cull the blighters as they increase inside a perfectly produced manuscript with no encouragement.

As a child I found errors in publications of Enid Blyton. There’s a rather amusing incident in which Noddy goes to bed with his hat on instead of taking it off. That’s just not ok and I noticed it aged 6 concluding that even poor Enid needed a skirt yanker too. I took on the role of self-appointed yanker and composed a letter to Enid which my mother loyally posted from our home on an Air Force base in Gütersloh, West Germany. Many years later Wikipedia reliably informed me that Enid didn’t receive my letter, having died the year before my birth. There were several more skirt yanking moments between myself and Enid and I often wonder what Mother did with my letters. Knowing her, she spent our meagre income on an expensive overseas stamp and posted my offering to Enid’s London publisher without ever receiving a response. 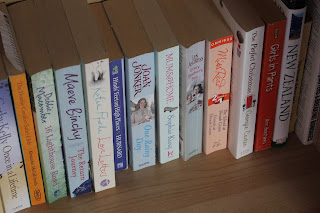 So what to do, what to do? I stop my busyness and find I have twelve A4 pages of edits burning a hole in my ‘helping others’ folder from my latest read.

I’ve had mixed responses through offering my pages of corrections in a Word document, which I spent hours making fit for understanding. One author who I knew by association, accused me of touting for paid editing. She was wrong. There was nothing I could add to the edits I offered for free. She didn’t want them and I deleted them from my file. It was very hard to review her novel after that, knowing she didn’t have a teachable spirit and her work would never improve. Nobody would ever be able to help her, not just me. I read none of her other works and subsequently doubted the 5*reviews she got. She didn’t just have her skirt tucked in her knickers, peculiar grammar and juvenile use of speech meant she had no knickers on at all under there!

The irony is she didn’t need to get personal; she could have accepted the edits, said thank you and walked away. I’ve no intention of checking afterwards that my suggestions were implemented. I’ve moved on. I’m jotting down things from the next book I’m reading.

But there have also been lovely responses. A complete stranger who I stalked on Goodreads to find an email address, thanked me profusely. She’d had numerous paid editors check her work and was surprised. Her novel was clean of typos but one important omission blew her mystery-thriller up in her face. When a reader knows something isn’t possible; the author’s in trouble. She thanked me and I believe she changed her conclusion. I haven’t checked but I wish her well.

I’ve had sweet emails from traditionally published and indie authors but sadly deleted as many sets of notes as I’ve sent. It makes me wonder about all these folk who seem happy to walk around with their skirts tucked in their knickers.

Let’s just get this straight. I am not happy with anything less than perfect. I want a skirt-yanker and if that’s you, then so be it. I shall brace myself for impact.

Yes it can hurt. One of my favourite people in the world is a writer who private messaged me on Facebook and said she’d downloaded my book but daren’t review it because of all the things wrong. She took the trouble to point them out and I spent the next 6 months in edits and rewrites. The words ‘had’ and ‘that’ need an immigration visa nowadays to enter my novels and I know how many have licence to exist, should they try to breed while my back is turned. I bought paid editing help and banned curse words such as ‘just’ from coming anywhere near my keyboard during formal writing. Adverbs are used sparingly, like sprinkles on special occasions. A trusted author reads my beta work before publication and once sent 46 A4 pages in teeny font of things wrong. Gratitude means I return the favour with dedication and pernickety-ness which isn’t a word I know.

Why do I care? Because I do not want my knickers or worse, my bum, on show for the world to laugh at.

So I will continue to make scatty notes on my Kindle as I pound away on my treadmill in the morning. They won’t be essays because I’m short sighted and won’t stop the machine, so if an author finds a convoluted description of the error, they can be sure I fell off.

My qualifications are an honours degree in English and almost two decades in education, plus a decade of writing and making common mistakes. I listen to other authors and do online tutorials related to writing and producing clean work. I am committed to not making the same mistakes twice, which helps with new works.

A short dance with the role of professional editor sent me off the deep end with OCD because I needed to catch everything and I mean everything. What many authors don’t do is read the small print in their editing contract. There may be a clause in it which lists how many edits per chapter can be caught as a minimum. I subcontracted for someone who after I pulled an all-nighter and contacted him in tears because the work (already published) needed a complete rewrite, told me this astounding fact. “Just flag ten errors per chapter.”

“But,” I sobbed over Google Hangout, “I can do that in the first paragraph.”

“Yeah, don’t do that,” he said. “Spread it out a bit. And by the way, you’re flagging grammar and typos, not doing rewrites. It’s a 6 hour job. I can’t pay you for the other 28 you’ve done but thanks for all the updates. Maybe for you, I don’t need them hourly, despite what it said in your contract.”

The expression is, ‘horses for courses.’ Different editors catch different error types. You may have employed two professional editors, but they weren’t paid to overhaul your entire manuscript. And each person is different. One has a pet hate of word misuse while another goes after passive voice like a heat seeking missile. Horses for courses. Never forget that.

I go after many things and can’t stop. I won’t walk past those belly-pants on show for the world and I can’t do it professionally because I’m too obsessive and it makes me ill. If I do it as a reader, I convince myself it’s part of my reading process; not my job. Phew. That makes it all right then.

One question remains unanswered. When someone offers you free edits why would you not take them? I can’t offer any clues. When a lovely reader recently pointed out an error in my latest novel I thanked her gratefully and went after that little sucker in my manuscript like a zombie hunter, hoping to find the nest while I was in there.

The satisfaction of knowing my knickers are temporarily not on show is overwhelming. Send them. Send those errors in their ones and twos, warn me gently if they’re in their tens but send them.

Yank that skirt out of my knickers. Don’t leave me showing my bum when you know I’ll be embarrassed. Please I beg you and promise I won’t shout.