Review: Worlds of the Never

Worlds of the Never by CJ Rutherford
My rating: 5 of 5 stars

Really gripping book. I powered through it in a weekend and became very antisocial. This installment closes off many of the open story arcs and resolves much of the plot. There is love, death, penalty and sacrifice, all the best ingredients for a quest. I'm thrilled that it looks as though there might be a fourth book. Can definitely recommend.

View all my reviews
Posted by Unknown at 20:56 No comments:

The OCD Shopper's Trip to the Supermarket

My longsuffering husband does the shopping and has done since the third child left home. For a while he did it with the fourth child and then by himself. He rather enjoys all the choosing and I absolutely-without-a-doubt-hate it. I used to do it once upon a time. I dragged four small children around with me on reins and in trolleys and could do it in record time. I also did it when we lived in Market Harborough and had no car and I was required to carry all the shopping a mile to my front door and arrive home with jelly arms and leaking bottles of milk. That was in my former, very distracted life of being all things to all family members and I didn’t notice things quite so much.

There’s something about the aisles and lighting nowadays which makes me leave my brain in the turnstily thing you push your reluctant trolley through before you can even begin the shopping process. On Friday I had a list, a very good list which Husband and I share on Google Docs so we can change and update it without me texting him to say, hey, ‘Don’t forget the red wine.’ Now I can sneak it onto the list and watch in the list updates as he deletes it. I can write, Countdown-belly-hugging-knickers and he can write, what size?

It’s like a little communication war dance or a mating display. I love it. Husband probably doesn’t but I am fortunate in that he’s imbued with amazing patience. 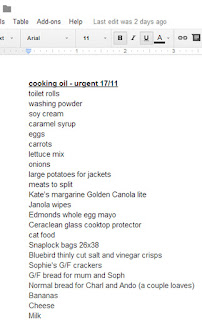 Husband can update it on his phone because he has an android but my Windows 8 won’t let me. Thanks to an obscure argument between Microsoft and Google, I have to scurry home to my laptop to put WINE back on the list, only to watch him wipe it off using his extremely obliging phone.

I’ve said lots of times that I’m OCD and struggle with the offensive aisles full of products of differing colour and shape facing in all sorts of directions. I spend more time turning things around and putting things back which often means I come out with lots of things that weren’t on the list and only some of the items that were.

For instance I came home with a lonely butternut squash that was bigger than all the rest and messed up the pattern in the crate. Now it sits alone in my vegetable box and matches nothing else because it’s not a potato or kumara. I’ve shut the lid on it and its fate will be sealed with the roast I’m plotting today...or perhaps tomorrow. It’s sunny today and not all the grass is the same length so I have other things to do.

In the car park I almost lost my trolley into the side of a flash BMW parked next to me but caught it at the last minute. That got me wondering why supermarkets don’t think about their pedestrian-trolley-pushing-shoppers as they angle the tarmac towards large storm drains at the edge. I also don’t know why they direct us towards a path with pedestrian crossings and then shove massive lamp posts in the centre for us to negotiate.

Needless to say I had an interesting morning during which I did no writing. I re-engineered the supermarket car park in my head in which all parking spaces were single and to be entered face first in lines, enabling shoppers to access the back of their vehicles and drive straight out. Behind each vehicle would be two tiny bumps to park our trolleys against during unloading and stop them wandering off to fill another vehicle with tangled metal and food. I put lots of things right in the store and had different conversations with the same lovely lady eight times as we passed in the aisles. I helped a lady find hair dye for her daughter and then put all the boxes neatly facing forward.

I spent way too much money.

I didn’t get gluten free/dairy free bread and Husband had to go out again later to a different supermarket.

I did buy fake cheese slices which apparently neither my husband nor our 3 house guests like.

I found some hummus with bits of things in which has no dairy or wheat and cannot make me ill which I am rather thrilled with.

When I got home I found the food cupboards offensive and reordered and cleaned the pantry, fridge and chest freezer. Now I shout when anyone moves anything. 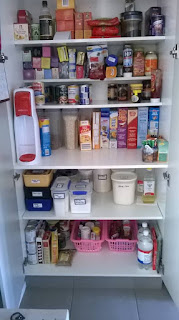 I will not be allowed to do the shopping again and that’s ok because I’ve decided that shopping makes me unbearable to live with. 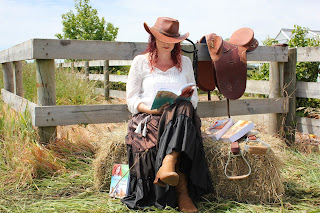 #OCD #Supermarkets #amwriting
Posted by Unknown at 13:11 No comments: