A life without running - unimaginable!

I began running when I was 35. It was a shock to my body which enjoyed nothing more than a fast walk since the age of 16, but I didn’t feel I had much choice.

Overweight and with a diagnosis of Rheumatoid Arthritis, I took my last anti-inflammatory pill and broke out an ancient pair of running shoes borrowed from my sister. At 6am under cover of darkness in the middle of an English winter, I ran.

It was a hideous experience, only lessened by the fact I could lump along in the pitch black morning, dragging a yawning dog for protection. One and half miles of walking, jogging, gasping and heart-pounding-headaches seemed to do more harm than good. I think I leaned on every lamp post on Newcombe Street, Stuart Road and Bath Street in a miserable twenty minute circuit of agony and humiliation. By the time I clawed my way up the steps and pounded on the front door, the dog was awake and ready for a proper walk and I was half dead.

I ran four times a week for three months, dashing home to shower and get ready for work. Six months later and I’d ditched the dog because he pulled me into one too many bushes after stray cats and I was running as far as I could get in an hour. My arthritis had abated and my clothes hung off me like curtains. I’d get out of bed on running days and test my ankles, seeing how painful it was to stand. The more it hurt, the more I ran, releasing happy endorphins into my blood to carry me for the next few days.

I’ve run ever since and I’m sure I’ll meet my Maker running on some quiet country road; in New Zealand now, the dark mornings of England swapped a decade ago. Running provides my sanity, my pain relief and my reason for getting up in the pre-dawn peace. I talk to God; I plan my day and I find my equilibrium. It keeps my weight down and I’m better for it.

Below is a short story I wrote a while ago. Nobody else should get offended because it’s actually about me. It’s something of my journey those first few times at the running club - yeah, I even joined the Harborough Runners and still have the tee shirt they gifted me the last time I attended before we emigrated. I’ve treasured it enough to carry it across the world. It reminds me to keep running - and maybe one day I'll squeeze myself into it. 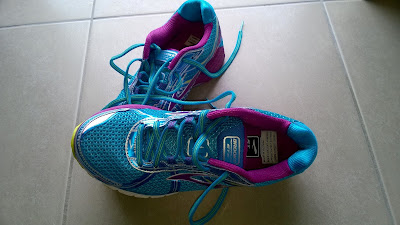 Carmen tried not to look at her feet which padded along beneath her. Her body heaved with each new step and her lungs burned with the effort of processing the oxygen she needed. “You’re nearly there!” she shouted at herself, ignoring the flush of embarrassment creeping up her neck. Her body lied bitterly, insisting she gave up, her muscles protesting at the distance and the pace.

“Car-men, Car-men, Car-men!” The shouts unnerved her, calling her name. Emotion hitched in Carmen’s chest, sent up from the space in her stomach where she buried her feelings. She beat it down, not bothering to analyse it and concentrated on her race. The finish line loomed up ahead, coaxing and inviting and yet still so far away.

The way was open. No other runners blocked the view between Carmen and the coloured bunting fluttering in the breeze. Her vision blurred with tears and she heard the sob escape her heaving lungs.

“One hundred metres! You’re nearly there!”

The shout broke through Carmen’s fragile concentration, filtering through the cacophony of noises to register in her brain. She risked a look towards the barriers and saw his face beaming out at her. The overwhelming urge surfaced, to stop running towards the finish line and the eager faces of the officials and run to him instead; to wrap herself in his comforting arms, eat a burger, watch TV, roll in their double bed with hot kisses and frantic hands. But the pride in Mike’s face crushed the urge as his blue eyes willed her towards the fluttering decorations and the cheers of those lining the home straight.

“We’ve worked for this, baby! This is what you wanted; you’re winning!”

Carmen turned her gaze towards the ‘F’ on the flapping sign screaming ‘Finish’ and aimed for it, blocking out everything else around her and re-entering her zone of concentration. She pep talked her reluctant body, coaxing out a sprint as her feet pounded the asphalt, shaking every bone and joint with damaging impact. Her vision blurred with exhaustion and the grey surface beneath her danced, pushing up into her face and dashing away again like a freaky fairground ride. She tried not to notice, fixing on that ‘F’ as though her life depended on it, realising the longer she stared how much it mattered. Everything rode on her finishing this race; her marriage, her self-respect, her punishing regime, her sacrifice, herself.

Carmen plundered the depths of her sanity and fought the demons in her mind. They rode her back and laughed at her as her feet pounded the floor. She shrugged them off as the sign for the finish line gave an audible flap in the growing breeze. She was that close. It clapped her to the end, hanging loose from its ties, sticking around an extra hour just for her. The officials sighed with relief as the fat woman pounded under the awning, finally able to leave.