My tiki tour of the Waikato - beautiful Ngaruawahia

See, it’s really not that hard to say, but it is just one of the Maori names that gets absolutely mangled in the telling. I remember looking at the signpost the night we passed through Hamilton and ended up too far north and thought, ‘I ain’t gonna be saying that out loud’. But after ending up living here 5 years later, I really can’t see what the problem was.﻿
﻿
Ngaruawahia was - and still is - a Maori stronghold within the Waikato. It is the home of the Maori king and the seat of the Kingitanga movement, which first sought to establish a Maori royalty from amongst the tribal leaders. Pōtatau Te Wherowhero, the first Maori king, was crowned in Ngāruawāhia in April, 1857. Tuheitia Paki held his coronation at Turangawaewae Marae,  following his mother's death in 2006 and is the current monarch, internationally renowned as the king who said ‘no thank you’ to being visited by William, Kate and baby George Windsor recently.
Despite the city of Hamilton’s sliding climb north as part of its great expansion, this tiny town predates it by more than two centuries. I always thought that the name meant ‘the twin rivers’ because the town is situated on the exact location where two significant rivers, the Waipa and the Waikato converge, becoming the fearsome and Mighty Waikato. That just shows what I know, as it apparently means, ‘The opened food pits’ - Wāhia ngā rua.﻿

In the 1600’s, tribal law was paramount and so, when a Ngati Tamainupo chief and a Ngati Maniapoto woman decided to elope and join the Waikato tribe in Ngaruawahia, it was a factor in the disunity between the Waikato and Ngati Maniapoto tribes. When the first child of Te Ngaere and Heke-i-te-rangi was born, Ngati Maniapoto were invited to come to the celebration, which must have been a very tense moment for all. Te Ngaere’s father honoured the visiting tribe by naming the tiny boy, Te Mana-o-te-rangi and they accepted the attempt at reconciliation. Legend has it then, that Te Ngaere shouted, ‘Break open the food pits, Wāhia ngā rua’ referring to the traditional hangi, which is an underground pit where food is cooked and the name stuck, albeit slightly reversed. The sharing of food is hugely important to a hospitable culture such as Maori, who pride themselves on their care of visitors and it would have been a feast to behold. If you ever get the opportunity to eat hangi food, then do so. It is incredibly nice and I just love the smoked taste that it has. 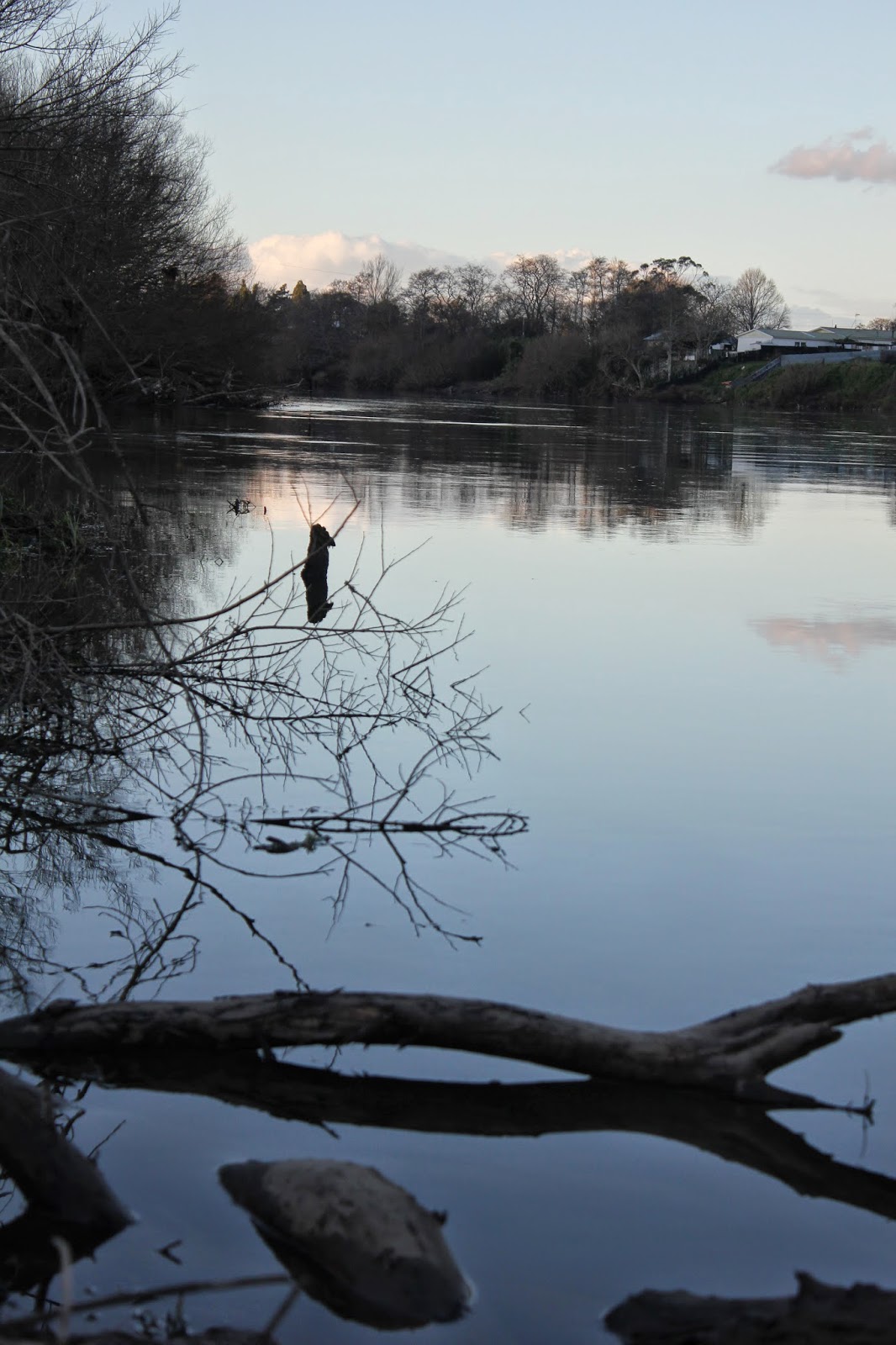 Seeing as Ngaruawahia's name involves a hangi, I should probably explain what one is, but please don’t be put off by my description. First a pit is dug in the ground, a fire is lit in the bottom, huge stones are heated over it and then baskets of food are placed on top, meat at the bottom and veggies on top. The hangis I have been to, involved quite a lot of tin foil, which clearly isn’t traditional material, but there was also a goodly covering of sack cloth before the earth went back over. It was left for several hours and then dug up and we tucked in. Whilst on exchange to Calgary University in Canada, my daughter and another New Zealander sought permission to do a hangi for a ‘celebration of cultural foods’ day, thinking that it would be awesome to demonstrate something significant from their homeland. Sadly the Uni wouldn’t give them permission to dig the hole on campus and so alas, they had to think of something else. But I can promise the students of Calgary - you seriously missed out!

With our usual audacity, following the English invasion of the Waikato in 1863, British Imperial Forces renamed the town ‘Newcastle’. Latterly this explains some of the street names, such as Durham Street, but the name never stuck and Ngaruawahia determinedly stuck its chin in the air and shucked off the insult. My Hana Mystery Series is partly set in Ngaruawahia. Hana Du Rose purchased her home in the Hakarimata Ranges and ventures into this small town on numerous occasions. Her next door neighbour, Maihi, is related to most of the people in the town and through the 'cuzzie's grapevine' keeps her finger very much on the pulse of everyone's business. My characters are fictional but hopefully, epitomise the kind of Maori welcome and sense of belonging which we have been fortunate enough to be drawn into.
﻿
When we first announced that we were moving here, the people of Hamilton would shake their heads and wish us well, expecting us to be robbed, gunned down or just disappear without trace within the first few months. We toddled off up here into the back of beyond and have never been happier. Early every Saturday morning there is a street market, where you can get your veggies and your plant cuttings, numerous arts and crafts or just buy second hand clothes. Or if you so desire, you can eat from one end of the main street to the other and then go home calling it ‘breakfast’. We love it here. There are regular craft markets and the sense of community means that there is always something going on down at The Point.
﻿﻿﻿ I once mentioned to a local resident, how much we enjoyed living here and how I felt that I had to put some of the myths about Ngaruawahia to bed, amongst my Hamiltonian friends. She grabbed my arm in horror, whilst putting her finger to her lips, “Don’t do that!” she cried. “We don’t want them all living here!”

﻿﻿﻿﻿I’ve had the privilege of being welcomed onto Turangawaewae Marae and enjoying a powhiri and a ﻿﻿﻿﻿hangi there. Photos are prohibited once on the marae but I can promise you that it is beautiful, the tour was awesome and the sense of love that the elders have for the town and for their history is deep and genuine. The land on which my house is built was once owned by Te Wherowhero, the Maori king, confiscated by the defeating English. The curse has long since been removed by the kaumatua, as our guide reassured me, but there are dark areas around which still hurt from the bloodshed and the injustice. A paddock nearby, where my youngest daughter and I used to ride our horses, definitely contained something bad. If one of the horses was going to go loco, it would be in that paddock. If someone was going to fall off, it would be there. We stopped riding in it eventually, despite the fact that it was perfect in every other way. As a Christian, I walk and pray over our boundaries with my Rahui pole regularly, a piece of driftwood found on the riverbank of the Waikato at the edge of our property and inscribed by me, with the words of Psalm 90:9-11. Without exception, every Maori I’ve met has been respectful of my Christian beliefs. But it’s a fool who mocks and does not take seriously the spirituality of Maori and show it a healthy respect in return. 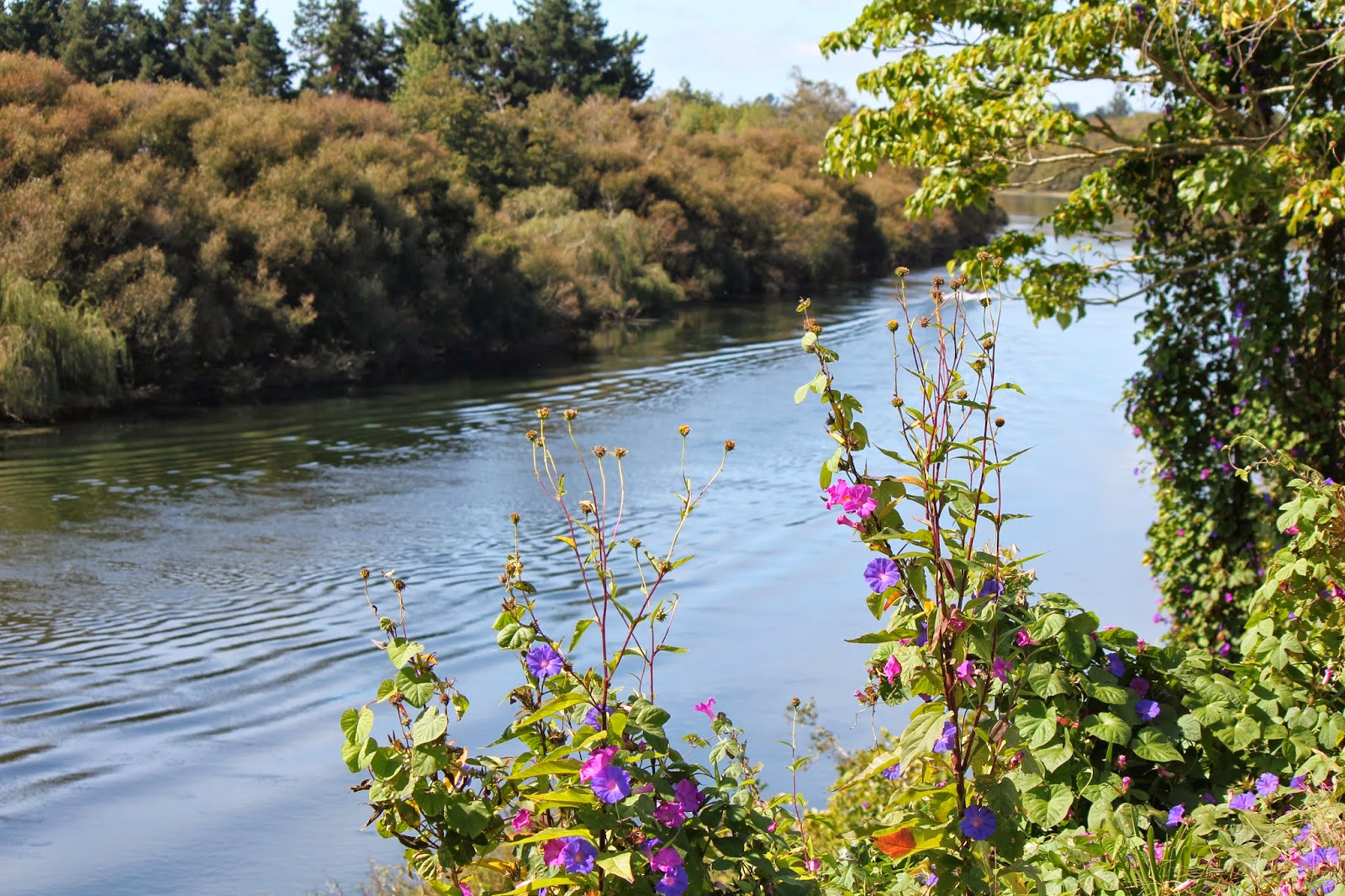 Until I took the above photograph, on a quiet Sunday afternoon, of the main street in Ngaruawahia, I had overlooked the influence of the Hakarimata Ranges. They are just there, quietly in the background, channelling a damaging north-easterly wind during winter and ensuring rain when our water tanks get low. I have been soaked in the ranges when the rest of the Waikato has been drought-dry and nobody would believe the 5 hours of soaking which I had shared with 2 class teachers and 60 wet Year 5’s. From that day onwards, my daughter’s teacher was nicknamed, Mr Noah and could never get parent helpers for a day out. Hamilton had enjoyed a lovely, dry, sunny day.﻿﻿﻿﻿﻿﻿﻿

There is water in most directions in Ngaruawahia. Bisected by two rivers, the Waipa and the Waikato, it’s not that surprising. It is a beautiful, peaceful town, steeped in community and history. Oh...but don’t tell anyone, will you?